4/24/2020 Headlines, PNG News
The PNG Mobile Squad Seven from Mt Hagen deployed to Daru, Western Province two weeks ago to manned the Western Indonesian border are still stranded on the island due to lack of funding from the South Fly Administration and Police hierarchy. 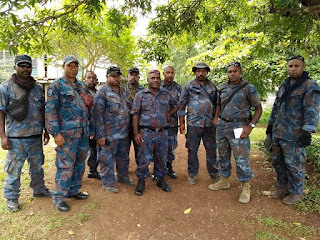 MS7 Squad Commander, Chief Sergeant AK Kukuma said since the deployment of his team to Daru, they were supposed to be at the border by now, instead, the full 40 men who are fully armed are still on the island due to financial constraints and its really frustrating.

Chief Sergeant Kukuma said he had a briefing this week with the Controller for South Fly and Middle Fly Command Inspector Saiwa Ricker and have raised their concerns and issues.

He further stated that accommodation and food rations were provided to them by the business houses and the local communities to sustain themselves, but they need funding to get out quickly to the border.

''Security personals who are still on the island border villages like Bula are unmanned and we still have reports of illegal crossers in that area,'' said Kukuma.

Chief Sergeant Kukuma told NBC reporter in Daru, that they are just wasting their time there when they have an important role to play during this crucial time.

Chief Sergeant Kukuma further highlighted that the police have their operational plans in place to carry out their order.

Therefore he said the health and police have to work together to come up with a well-coordinated plan to get relevant officers to the border to help stop further spread of COVID-19 into Western Province.
NBC/ONEPNG
Next :