The SP PNG Hunters will field their most experienced halves combination this Intrust Super Cup season when they take on second-placed Norths Devils at Bishop Park on Saturday with one major goal in mind – control the football. 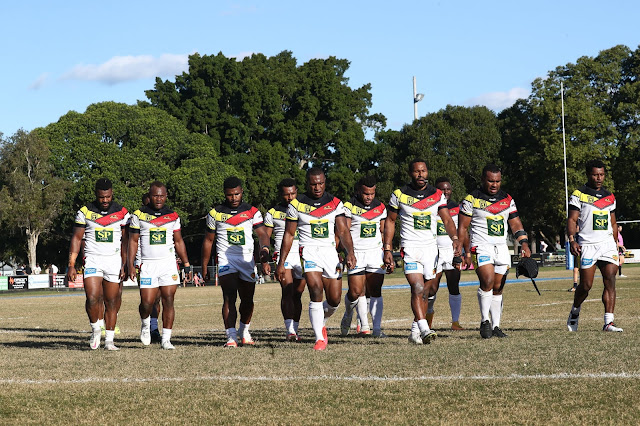 The 28-year-old Simon played the first five games of 2021, which produced three victories for Matt Church’s outfit, all alongside Watson Boas before he returned to England to resume his contract with Doncaster.

imon has been improving his game with the Runaway Bay Seagulls in the Gold Coast A-grade competition. After four games there he has shown he is ready to help steer the Hunters with Watson’s brother Ase his guiding partner.

It will be Simon’s 40th ISC game and Boas’ 112th with hooker Wartovo Puara Jnr’s 116 appearances giving the Hunters their most seasoned up-front part of their spine in what is otherwise a largely young line-up.

Church knows the key to competing with well-oiled and confident teams like Norths is for the Hunters to complete their sets well.

The PNG boys’ completion rate was 79 per cent in the 38-28 loss to Townsville Blackhawks last Saturday. They will need to limit their turnovers against a Devils team that plays an expansive style with shifts from their own half while regularly taking short kick-offs and line drop-outs.

“We just have to complete our sets to give ourselves a chance against top sides and to do that we have to maximise ball handling and efficiency,” Church said.

“To have someone of Ase’s experienced is highly welcomed – he’s done it all having played for his country and captained the Hunters to a premiership. And he will enjoy the responsibility with this young group. Most successful teams have stability in key positions and we haven’t been able to provide that in the spine.

“Charlie Simon is a pretty experienced half coming back in. He had a few things to work on and went back to reserve grade and worked on those things and deserves to be back in the side.

“We have to be able to build pressure against top teams and that means playing uptempo like the Hunters always do but also respecting the ball and getting to the end of our sets. That’s our No.1 goal this weekend.

“If anyone doesn’t turn up in this competition they can be beaten, no matter where they are on the ladder. If we turn up and put pressure on Norths, we’re right in the game.”

The Hunters know what they are up against in the Rohan Smith-coached Devils who have lost only one match from nine this season – a 36-0 drubbing by Burleigh Bears.

PNG have had success against them too, having won five of their previous 11 meetings. Norths will field several highly experienced NRL players and well-credentialled ISC stalwarts along with NRL-bound youngsters Brendan Piakura and Xavier Willison.

Former crafty Newcastle Knights and Gold Coast Titans half Tyrone Roberts, who played in the English grand final and Challenge Cup finals in 2018, is listed on the interchange bench to return from a long stint out with an Achilles injury.

Next : Court Rules in Favour of Madang Governor Yama