The Papua New Guinea Opposition Leader Belden Namah said he's very disappointed at the movement of some members from the Opposition to Government yesterday.

He described it as unfortunate, claiming that all on the inside know what happened behind the scenes. 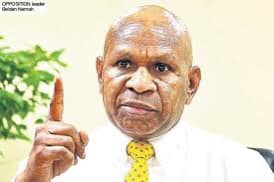 Mr. Namah said he's disappointed with the selfish behaviour and lack of integrity of certain Members of Parliament, claiming they deserted in the middle of the night for inducement, which then swung the balance.

In a statement yesterday, the Opposition leader claims the leaders that deserted the camp have a history of being 'persuaded' to shift their allegiance on the eve of Parliament sitting.

Mr. Namah said he's received apologies from Members who were forced to vote with the Government yesterday, and their reasons for doing so.