The Electoral Commission has assured the 22 candidates contesting the Goroka by-election that it would do all it can with the assistance of 400 police personnel engaged for security operations to ensure the by-election was not rigged. 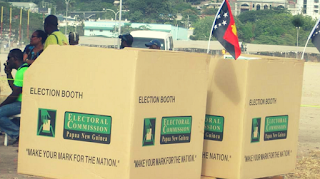 In giving the assurance, Acting Commissioner Simon Sinai warned that any instances of election malpractice would result in the by-election being rigged and Goroka risk being without a Member for the remainder of this term of Parliament.

Mr. Sinai’s warning comes in the light of the fact that the by-election stems from a lengthy election petition which took more than two years resulting in the people of Goroka being starved of basic services since 2017.

Under Section 106(a) of the Constitution, no by-election would be conducted if the office of an elected Member of Parliament becomes vacant within the period of 12 months before the fifth anniversary of the date fixed for the return of writs for the previous general election.

“Therefore, I appeal to you the good people of Goroka to adhere to our election laws and abstain from involving in or resorting to illegal activities that would only derail all our efforts to conduct a good and successful by-election.”

His appeal follows allegations raised in a petition by the candidates claiming that a certain print shop in China Town in Goroka illegally printed and distributed some 15,000 to 20,000 ballot papers to voters throughout the electorate.

The candidates claimed that on Thursday, 17 September 2020 police in Goroka received a complaint that the print shop was printing illegal ballot papers with the intent to have them distributed to the public in the 160 polling places prior to polling aimed at increasing voter numbers for a certain candidate.

Mr. Sinai said that the Electoral Commission has printed about 80,000 ballot papers for the by-election, and the number of ballot papers correspond to voter numbers on the electoral roll for Goroka Open electorate which is 79,893 eligible voters.

“I have given specific instructions to the Returning Officer, Assistant Returning Officers and polling officials to heed of the administrative issues including ballot paper management raised by candidates in the petition.”

The candidates in their petition have also requested that ballot papers in the possession of Electoral Commission be endorsed or signed by three appointed Magistrates for each of the three LLGs (Goroka Urban, Gahuku and Mimanalo) to prevent illegally printed ballot papers from reaching the polling booths.

However, the Acting Commissioner explained that the request by candidates would be a serious breach of election laws and amounts to tampering with the ballot papers thus invalidating them.

“Section 153(4)(1)(c) of the Organic Law on National and LLG Elections (OLNLLGE) prohibits any other marks or writings on the ballot paper not authorized by this Law or Regulations made under this Law to be put on it.”

“Only marks allowed by OLNLLGE are voter preferences and initials (signature) of the presiding officer or a prescribed official mark.”

Mr. Sinai confirmed that electronic scrutiny or verification of ballot papers would be done for the Goroka by-election count to ensure no ‘foreign’ ballot paper was included in the count process.

He added that police security surveillance cameras would also be in operation at the 160 polling places and count venue at the National Sports Institute to capture any election malpractice or security threats during the by-election.