The government has just finished discussing PNG's safeguards against Coronavirus in an emergency meeting called by Prime Minister James Marape.

The Prime Minister is now addressing the nation live on national TV and streamed on social media.

While the media camped at their door and the nation awaited the national address, a post supposedly by the PM on decisions made is going viral.

Journalist camped at the Prime Minister office are annoyed as they have been waiting for the PM since 10am this morning. 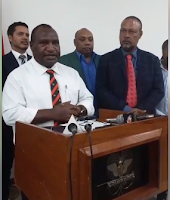 The Prime Ministers Media officers are not sure who posted the statement on the PMs official facebook page.

Earlier on today Police Minister Bryan Kramer was tasked to provide an update to the media at 1pm today after a National Security Advisory Council meeting.

Kramer says a set of recommendations by the Council is being talked about and
the National Executive Council will discuss what measures will be taken to safeguard the nation from Covid 19.

He told journalists who were waiting since 10:30am that the Prime Minister will make an announcement right after this high level meeting.

It is understood the government will decide if there will be a lockdown.