3/22/2020 Headlines, PNG News
Five bodies of the12 people that were buried under the soil from a major landslip in Western Highlands Province in PNG  were recovered. 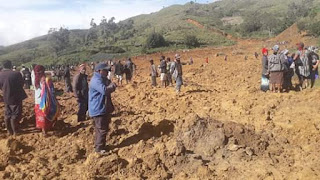 According to NBC's Reporter Stanley Pil who was on the ground yesterday, authorities have moved in and are conducting search and rescue in the area.

The 5 bodies are now at the Mt Hagen Hospital morgue whilst search is continuing for other bodies.