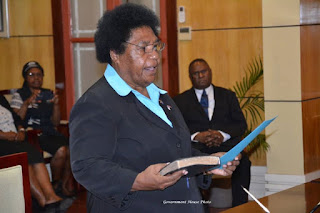 This follows her appointment by the Judicial and Legal Services Commission in December 2019.

Justice Sagu in today's ceremony recited her Declarations of Office, Loyalty and Judicial Declaration before the Governor General, his Excellency Sir Bob Dadae.

Justice Sagu will be serving as a judge to the National and Supreme Courts of Papua New Guinea for a period of 10 years.