“I demand equality for women and girls which is the constitutional right, their human right by the United Nations declaration on Human Rights to which Papua New Guinea is a signatory. I demand the national government take their responsibility seriously…” - NCD Governor Powes Parkop, speaking at the launch of the UN’s Spotlight Initiative to end gender-based violence. 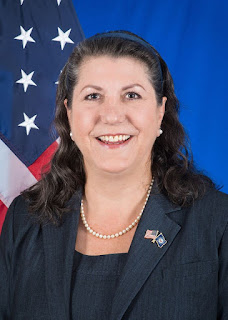 “Papua New Guinea’s paradigm shift to empower women in the decision-making space is a comparative advantage as they are the country’s important agents for development.” - Minister for Foreign Affairs and International Trade Patrick Pruaitch, welcoming the Deputy Secretary-General of the United Nations Amina Jane Mohammed.

“One woman on each board is just a starting point. Clearly we need to do better.” - Minister for Public Enterprises and State Investments Sasindran Muthuvel introducing a concrete measure to require at least one woman sit on the management boards of PNG’s State-owned enterprises.

“I am keen on making the penalties on violence against women harsher…and I will be your advocate in Parliament.” – Prime Minister James Marape, speaking at the November 2019 Women’s Forum, in Port Moresby.

March is recognized by the United States as Women’s History Month, a time when we reflect on the critical contributions’ women have made – and will make - in the world, and the work we still need to do to advance gender equality. I want to applaud the foresight and initiative demonstrated by your leaders to take these tangible steps and increase women’s role in Papua New Guinea society.

As we all know, efforts toward gender equality are not about one group versus another. It is about how all of us can improve the situation for our daughters, and our sons, for future generations in Papua New Guinea and around the globe. This matters to all of us. Quite simply, we know that countries where women enjoy equality and have full participation in political, economic and civil society do better than countries where women are oppressed. When any group experiences discrimination or unfair treatment, it hurts us all, and it undermines our most fundamental principles.

Because we know when women are empowered, their communities and countries are more prosperous, stable, and secure. That’s why we are dedicated to empowering women leaders across the globe, and we do so with a commitment to transparency, democratic values, and the rule of law. Ensuring that women are fully integrated into the economy results in tangible and quantifiable benefits, unlocking a nation’s full potential, and ensuring that potential is sustained, and that progress and stability endure

Papua New Guinea’s leadership has taken some impressive steps toward greater gender equality and women’s empowerment. The United States will be watching with interest at how these new policies are put into practice and we stand ready to support our close partner in this region.