1/08/2020 Headlines, PNG News
Pomio MP Elias Kapavore has called on the people of East New Britain province in Papua New Guinea  to give what they can, from their heart to the East New Britain for Australia Bushfire Appeal 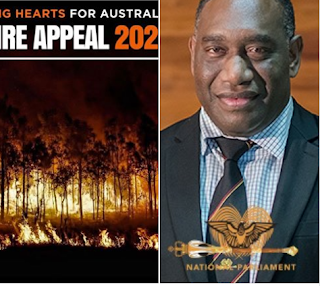 In a statement, Kapavore said though there are other appeals being launched in the country, East New Britain must show it’s heartfelt sympathy to Australia, which gave independence to PNG and continues to support it.

He said East New Britain and the Pomio District continue to benefit from Australia through support in various sectors like education and health.

A number of activities will be held to raise funds for this worthy humanitarian cause.