1/07/2020 Headlines, PNG News
Prime Minister James Marape on behalf of the people of Papua New Guinea has sent condolences to the people of Australia especially the relatives of the victims of the fire tragedies in Australia. 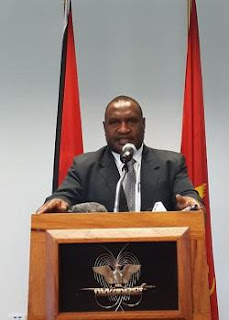 In a statement, Marape said Australia is the closest friend of PNG and is always the first in PNG in our times of adversities and thus PNG offers our hearts and hands to Australia in this time of fire-induced tragedies.

He said there have been a constant conversation recently between the Australian Prime Minister Scot Morrison and himself on PNG's engagement in this fire tragedy.

He also said if need be, PNG will give a hand upon Morrison's invitation to send 1000 combined soldiers and firefighters.

Marape also conveys to the people of Australia that many Papua New Guineans have been praying for them since the disaster first started.

A fire appeal secretariat has now being set up to raise funds for victims of the Australian bushfire.

He said the secretariat is driven by civil servants as part of the government's response effect to the bush fire.

The team will be raising funds for the next six months to help the people of Australia.

"The Chairman of the Secretariat is Chief Paul Nerau, and will be assisted by another eminent Papua New Guinean, Samson Kamati as Deputy Chairman. Dr. Eric Omuru has been appointed as the Treasurer, Koren Maso as Secretary," Minister Mori highlighted.

To kick-start the appeal, the Minister donated the first K5 000 (US$1,467), followed by pledges from other leaders and citizens.