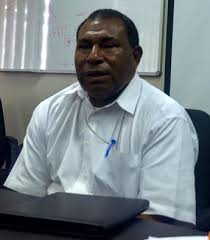 He was commenting on the arrest of Provincial and Local-level Government Secretary, Dickson Guina on Wednesday this week.

Chief Superintendent Damaru said that Mr. Guina was arrested for attempting to pervert the course of justice, in a case involving his niece.

He said that perverting the course of justice, is a crime that is becoming prevalent with people in authority, who are abusing their offices, to suppress investigations, and stop justice from being served.

Chief Superintendent Damaru also added that such actions only motivate and create incentives for fraud and corruption to flourish in the workplace, and are a deterrent to fighting corruption in the country.

He further said that the absence of whistleblowers legislation, is also placing people at risk of losing their jobs, and this is what is currently happening.