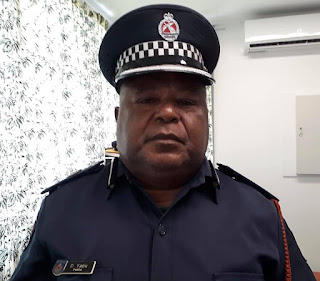 Chief Inspector Yapu said Mr Pomat and the landowners unlawfully assembled in the area and blocked off the road and prevented free access in and out of East Lorengau Refugee transit center after Police served two court orders to them.

The first court order was taken out by Tasion Group and the other was by the Immigration and Citizenship Authority.

Part of the court orders read:

1. The Defendant, his servants, Agents, Associates, Supporters and Relatives be restrained from preventing free access into and out of the East Lorengau Refugee Transit Center by Plaintiff , his contractors, sub-contractors and employees.

2. Defendant, his servant, Agents, Associates, Supporters and Relatives be restrained from threatening, harassing, assaulting or intimidating the plaintiff’s employees, contractor and sub-contractor.

3. Defendant be restraint from forcefully entering, encroaching or trespassing onto the ELRTC and be restrained 200 meters away from ELRTC.

PPC Yapu with the mobile Squad 10 members instructed that landowners leave the area as their actions were in breach and defying the court orders.

However, they refused to leave and remained in the area which prompted police to move in resulting in a commotion.

PPC Yapu said they (Police) were the authority that served the court order and expected the landowners to respect and comply.

“If they have any issues with court order, they may go back to court with their lawyers”, said PPC Yapu.

“Pomat and his supporters insisted and called for the Chief Immigration Officer to travel to Manus and talk with them in the manner in which the Contract was awarded to Tasion Group”,

“Police are only acting on Government directions and remains neutral on the issue. This is not a law and order issue, but a landowner issue and should be sorted out by relevant authorities”, PPC Yapu said.

“Kepo Pomat as a leader, should respect the PPC, as the authority on the ground and should not have assaulted me”, PPC Yapu stressed.

He said, assaulting a senior Police Officer, acting in the lawful execution of his duty is a serious criminal offence and Kepo can be seriously dealt with by Law.

Police are patrolling and providing security to the East Lorengau Refugee Transit center until the issue is addressed.