11/18/2019 Headlines, PNG News
PN GPrime Minister James Marape has assured the country no individual involved in present resource agreements under the Marape-Steven Government will request personal favour or success fees for the work they do.

In a statement released late this afternoon, the prime minister said they are all paid for doing the job. 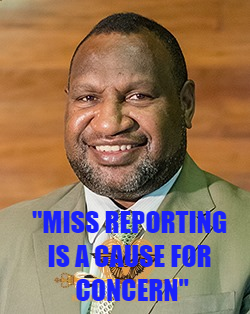 Marape said, the Post Courier or anyone out there who knows of public officials demanding fees should report to authorities like police or Ombudsman Commission.

He said protocols have been established for P'nyang gas resource and other resource project coming up for review and negotiations.

The state negotiation team is in active engagements to ensure this project is processed consistent with legal requirements of the country.

Marape said, gone are the days when the industry ran straight to the prime minister and ministers.

He said officials will vet, filter and funnel all projects on their own merits according to law.

Meantime, the Editor in chief of the Post Courier newspaper is expected to be summoned by the government to explain an article today (18th November), relating to the P'nyang Gas project agreement.

The newspaper reported, 'unnamed sources' claiming the certain individuals with the State Negotiating team will demand 100 million dollars as success fee for the gas project to go ahead.

Prime Minister James Marape is upset about the article, as the government's plan remain classified.

He said exchanges are going on between stakeholders on the government's position, however Post Courier released misleading information.

This the prime minister said, is a cause for concern.

Marape further adds, Post-Courier is a long time corporate resident of our country and the government expects corporate responsibility and highest standards of journalism accountability.

He said, PNG's international reputation continues to suffer when slanderous attacks like these are made without facts.

State lawyers have been instructed to look at how to hold the media, including social media accountable for misreporting.