11/18/2019 Bougainville News, Headlines, PNG News
THE BOUGAINVILLE Police Service has concluded the referendum security awareness campaign and is now preparing for the commencement of operations this week.
Bougainville goes into polling for the referendum on Saturday 23rd of November.
Deputy Police Commissioner and Chief of the Bougainville Police Service Francis Tokura who has toured the region for the last two weeks assessing the respective Police awareness activities, expressed his satisfaction with the preparations made so far and is confident of launching the referendum police security operations this week. 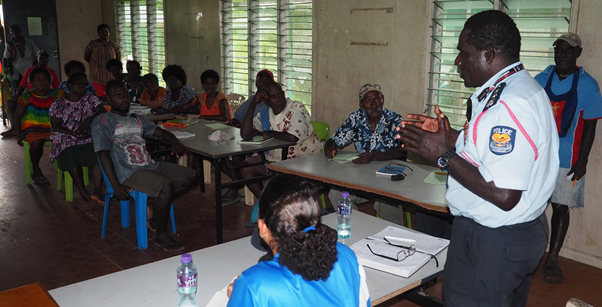 Mr Tokura last visited the Torokina District of South Bougainville on Wednesday 12 November and expressed that, “I am satisfied with the preparations and awareness that has been conducted within the last few months. It has been very effective and we have achieved our mission of getting the people aware of the security plans that are in place and of the do’s and don’ts that they need to be aware of come the referendum polling day.
“Despite the delay of funding and others challenges I am very confident to launch the police operation for deployment this week.
“We already have the Regional Police Assistance Mission personnel on Bougainville and they have taken posts in Buka, Arawa and Buin for the operation. They are now basically synchronising their plans with the local commanders and are gearing for the deployment.”
Last Friday Mr Tokura briefed all the respective regional commanders and the Regional Police Assistance Mission Team Leaders on the Bougainville referendum security operation order in Buka.
He outlined that the mission for the operation is, “to ensure that the Bougainville Referendum elections is delivered safely and fairly; without coercion and fear of oppression; producing a referendum result which is credible and will stand firm when scrutinised concerning its processes and the appropriate legislation”.
Mr Tokura said about 50 personnel form the Royal Papua New Guinea Constabulary will be deployed to Bougainville to assist the Bougainville Police to provide security during this period.
“The 50 personnel will be arriving this week and will go straight to their respective commanders for deployment,” DCP Tokura concluded.

(Photographs and captions below)

Deputy Police Commissioner and Chief of Bougainville Police Francis Tokura addressing the community at the Torokina Community hall during his last visit to assess the Police awareness campaign.


Three arrested over deaths of 10 Chinese in PNG