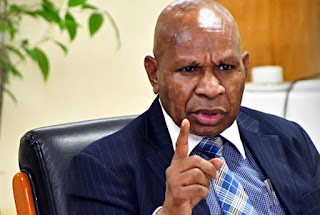 “The press release from the Prime Minister about his lack of development in Tari-Pori is not only condescending, but misleads the good people of Tari-Pori and Hela Province,” Mr Namah said.

“He has been elected member for more than 12 years and for more than eight years he was finance minister and now Prime Minister, and he says he has done nothing to fund development projects in his district or province?”

He also accused Mr Marape of discriminating when allocating service improvement funds during his term as finance minister.

He said: “As finance minister he (Marape) made sure his Tari-Pori district and Hela Province together with all other districts and provinces in government received their full DSIPs and PSIPs while he underpaid DSIPs and PSIPs for those of us in the Opposition.

“So what happened to all the DSIP and PSIP funds that Tari and Hela received in the last decade? Why does the Prime Minister have nothing to show for the millions of kina he has received for his district?

“The people of Tari Pori have the right to ask that very serious question and demand that their local member return to his electorate and work with his people. If he cannot administer his own district, what hope does the rest of the country have with this very disappointing Prime Minister?”

He further claims there is reason for members of the government caucus to be unhappy and looking to replace Mr Marape.

“Now in his press release he talks about having further development sharing formulas, but he has no plans, just talk and more talk.”

Mr Namah was scathing in his remarks, going as far back as the Laguna Camp that provided the impetus that eventually culminated in Mr Marape’s elevation to PM.

He said they now know he had no plans for if he ever became Prime Minister, and now the country is paying the price as the economy crumbles and crime is rampant right around the country.

“This Prime Minister has proven to be the most incapable in our history and he should seriously consider standing aside and have a fresh election in Parliament for the position of Prime Minister,” he said.