10/29/2019 Featured, Headlines, PNG News
All 111 members of  Papua New Guinea parliament will get vehicles from the Apec fleet, but the fate of 40 Maseratis is not yet known. 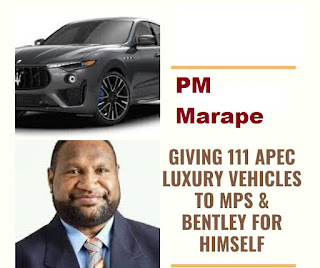 Papua New Guinea’s prime minister will receive one of the Bentley cars controversially purchased by the government at taxpayers’ expense for the 2018 Apec summit, officials have confirmed.

James Marape became PM in May with promises to crack down on corruption. The finance secretary, Ken Ngangan, has told the Post Courier newspaper that all 111 members of parliament will get vehicles from the Apec fleet for their electoral duties, though no one apart from the PM will receive a Maserati or Bentleys.

PNG hosted the Asia-Pacific Economic Cooperation summit in its capital of Port Moresby, spending an estimated US$135m on the event despite recovering from a devastating earthquake, a nationwide medication shortage, a polio outbreak and worsening TB rates, in addition to dealing with generally high rates of poverty.

The government promised the 43 luxury Maserati and Bentley luxury cars, as well as the rest of the fleet of around 300 vehicles purchased for Apec, would be sold afterwards with the proceeds going back to the government. But nearly a year later few have been sold.

In June the then minister for Apec, Justin Tkatchenko, said there had been “delays” with the tender process, meaning just two of the 43 luxury cars had been sold. Ngangan said last week said the new government had decided to keep some of them.

“Cabinet made a decision recently to have members of parliament presented with a vehicle each so that they can use here in the capital city, but for their electoral duties,” he said.

One of three Bentleys purchased would be made available for the office of the prime minister, he said.

Spending on Apec was a lightning rod for anger among Papua New Guineans, but the purchase of 40 luxury Maserati Quattroporte sedans and three super-luxury Bentley Flying Spurs – each costing more than AU$200,000 – caused outrage, prompting thousands of people to participate in a one-day strike.

The opposition leader, Belden Namah, told The National paper that his five opposition MPs would not accept any Apec assets including cars. “The country needs money. Why should MPs be given cars when they are paid vehicle allowances? This is double dipping.”

In February police had to put out an appeal seeking the return of nearly 300 of the cars, when 284 of them were yet to be returned to the government’s State Asset Recovery Unit. This did not include the luxury Maseratis and Bentleys, which had all been tracked down and recovered, authorities said.