9/06/2019 Headlines, PNG News
Ousted acting police commissioner, Francis Tokura, says the lack of a revocation notice of his appointment is creating confusion in command and control within the Royal PNG Constabulary. 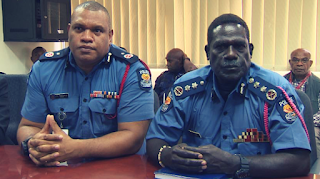 Mr Tokura's appointment had been gazetted, however, following Police Minister Bryan Kramer's announcement of the appointment of David Manning to succeed him as acting commissioner on Monday, there is still no gazettal notice to give effect to this.

Mr Tokura told the media yesterday, that he was only informed through a mobile phone text message that his appointment was revoked, and there is still no gazzette to this effect.

He says this is leaving the force in disarray, because there could be two police commissioners issuing instructions and directions, and this could split the force and create animosity.

Mr Tokura warned that this is currently happening.