9/03/2019 Headlines, PNG News
The Bougainville Senior Appointments Committee has been blamed for mishandling the disciplinary case against Chief Secretary to the Autonomous Bougainville Government, Joseph Nobetau.

President, John Momis, has accused the committee of foul play by not adhering to cabinet’s decision for the removal of Mr Nobetau. 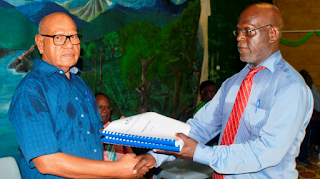 The committee was petitioned by the Minister for Public Service, Robert Hamal Sawa, in March, where Mr Nobetau was accused of undermining the ABG and issuing instructions that bypassed compliance processes.

A supplementary petition was again raised against Nobetau by the Minister for Finance Robin Wilson in April, for failing to support a cabinet decision including the controversial Caballus Mining Amendment fiasco.

The appointments committee then deliberated on the matter and found that the petitioners had no grounds for a Board of Inquiry to be set up to deal with Mr Nobetau’s case.

It found that the petitioners could not provide additional evidence or facts to support their call for the immediate convening of the Board of Inquiry.

It also decided that BSAC members would meet with the Chief Secretary to recommend a meeting with the Bougainville Executive Council to discuss and resolve the matter.

With the absence of President Momis due to a prolonged illness the Acting President, Raymond Masono, agreed to the meeting to resolve their differences in July.

President Momis claims that despite the reconciliation between the Bougainville Executive Council and the Chief Secretary the relations between them remained strained, leading to the council's decided to terminate Mr Nobetau’s services to the ABG.

Mr Momis further argued that Mr Nobetau had hijacked the appointments committee to influence the process where a Board of Inquiry was supposed to be set up to investigate the claims made against him.

Meantime, ousted Chief Secretary, Joseph Nobetau, has remained firm in the belief that the law will be on his side to acquit him of charges brought against him by the ABG cabinet.

Mr Nobetau said, while he accepts that in this case, some members of the Bougainville Executive Council have issues with his performance and conduct, it is a fact, that constitutionally, the final decision regarding termination must rest with the Bougainville Senior Appointments Committee, as mandated under the Bougainville Constitution.

Mr Nobetau further says, this is a process that he has always fully respected and this is evidenced by the fact that to date he has petitioned a number of Department Heads for misconduct.

Responding to the ABG President John Momis’ claims of usurping the Chief Secretary’s power, Mr Nobetau explained that he has always acted consistent with the mandated powers and functions of the Office of Chief Secretary, as prescribed by law.

He said, he accepts that over the past year it has been difficult for him to engage with the President, because he has been extremely unwell, and for the best part of the year, outside of Bougainville.

He maintains however, that he has always remained in touch via email and through official correspondence, both to the President and all members of the executive council, and only as recently as last week wrote appealing to again be able to meet in person.

Mr Nobetau said, he has always acted on the instruction of the President in progressing reform with the national government.

He adds, with his counterpart he was instrumental in formalizing the Charter for the Bougainville Referendum Commission, performed his role as transitional commissioner, which included putting in place much of the enabling environment for the BRC.

Mr Nobetau also helped broker agreement in relation to the referendum question following a breakdown of political discussions in October last year, and since then advanced discussions that led to agreement on the definitions of the options to be put, international observers and agreed joint awareness materials.