Nauru outlines benefits of sticking with Taiwan, as Solomon Islands considers a switch

Nauru’s President Baron Waqa maintains his nation has benefited greatly from its diplomatic relations with the Republic of China (ROC-Taiwan), as another Pacific nation, Solomon Islands considers switching to Beijing. 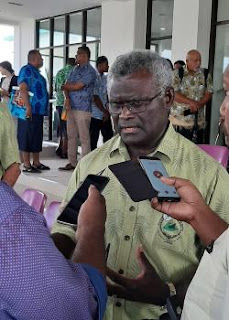 President Waqa was asked if he had any advice for his Solomon Islands counterpart Manasseh Sogavare, who has until the end of the month to consider severing ties with Taiwan, as lobbied by some members of Parliament.

“As you know Taiwan has strong allies with a few countries in the Pacific. And both Nauru and Tuvalu recognise Taiwan diplomatically".

“While we don’t want to be seen to interfere in the domestic politics of another country, I’s like to emphasise that Taiwan is a very strong partner with those of us in the Pacific - where we benefit from training and other co-operation in many fields. Not only that, we are also proud to recognise Taiwan as a democratic country of between 20-21 million people.

President Waqa said, “Our only concern is that Taiwan is not allowed to participate in international fora where they can bring their expertise in so many fields, in technology and other areas where the rest of the global citizens can benefit, said the Nauru President, who has been one of Taiwan’s strongest advocate in the Pacific region.

“You ask around the region, even those who don’t recognise Taiwan appreciate that Taiwan is participating well in the Pacific especially in improving the quality of life, was the advice President Waqa had for Solomon Islands.

Solomon Islands Prime Minister Manasseh Sogavare told PACNEWS earlier in the week his government will wait for the Taskforce report from its consultations around the Pacific and in Beijing before it reaches a decision.

“We also have a parallel process happening at home where the Standing House Committee is also gathering the views of various sectors and from the people of Solomon Islands. We hope to make our decision, as we’ve said, during our first 100 days in office, said Sogavare.

PM Sogavare has been reported as saying government will make ‘á sovereign decision in the best interest of the country and its people.’ Solomon Islands and Taiwan have been diplomatic allies since l1983.

The 100 days expires at the end of this month – but senior government officials have confirmed to PACNEWS a decision is unlikely to be made as anticipated because government will need to exhaust all means of consultation and in-depth analysis of switching allegiances, if it is to happen.