Home Headlines PNG News What can PNG offer the Pacific?

What can PNG offer the Pacific?

What really can Papua New Guinea offer the Pacific?

The question Secretary General of the Pacific Islands Forum Secretariat, Dame Meg Taylor has conveyed when asked about the role PNG has, or should play in the region. 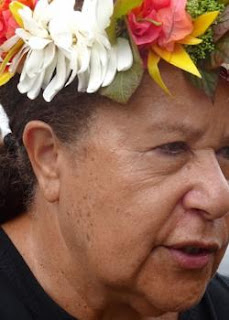 Dame Meg Taylor has been at the forefront of the Pacific Islands Forum Secretariat since 2015 and was unanimously reappointed for a second term in 2017. Carrying a banner for the Pacific, but with the flag of PNG close to her at the time.

She said PNG can play an even greater role in the region if and when it opens up its influence that is clearly seen and respected by the rest of the region.

While the considerable size of PNG has the tendency to seclude itself to its climate issues that are well documented at home, the issue still remains if putting itself in the forefront of greater climate security will be beneficial for it within its borders.

Then taking into consideration the geopolitical role PNG and its fellow pacific members have to contend with, as major global powers move in to create spheres of influence within the region.

“I think the region is now facing a very critical time and the climate change is a major security issue, but it is also the geopolitics of the region and the interest of big superpowers in this region and what does it mean for our country and how do we position ourselves as a group of all of the Pacific, but also how do we as Papua New Guinea and our relation to the rest of the Pacific,” Dame Meg said.

“Prime Minister Marape arrives here and I look forward to him being welcomed by the government of Tuvalu and the other leaders and of course by myself as secretary general that he will be here and I hope that he will be comfortable and see that Papua New Guinea has a role to play in the region.

“Often when I visit bigger countries, they say well what are we going to get out of the Pacific, and I say but why don’t you think of it this way. What can we offer? What can we give? What can we support? What can we show and help others?

“I think Papua New Guinea has a lot, and our own experiences as a developing country and our transitions through independence and the challenges we face today as a nation.

“What can we contribute there? What can we learn from other countries in the region? And that is one of the things that I have been thinking a lot about lately is how we as Papua New Guineans build a sense of nationhood around that role.”

Nationhood and patriotism Mr Marape could not hold back when asked about the role and contribution Dame Meg plays for the region and for aspiring women to look up to back at home.

“Totally proud of her! Shows that our women, when given the opportunity can rise up.

She is absolutely above comparability; incomparable,” he said. “As a Papua New Guinean, when I see her I am always proud.

“Many in the Pacific and outside the Pacific, they think that we are a male dominated society. When we see Dame Meg and even our own Ambassador, (High Commissioner to Fiji) Lucy Bogari, these ladies are leading the way.”

Dame Meg, when asked about her role at the Secretariat and her role as a PNG representing both her country and region, she said unity for Papua New Guineans would go a long way in the region.

“How very important this is for our young people that when I ask you where do you come from, you will say I am Papua New Guinean first,” she said.

“Because until we do that, we will always be from a tribe here and a tribe there, which is important to our identity, but in the 21st century and in the international community- to belong to a nation is at the heart to belong to something bigger than ourselves and that is a nation of many different languages and tribes.

“I’m Papua New Guinean, but I serve all the Pacific now, and Papua New Guinea I hope is rather glad that I fly their flag, but I fly everybody else’s flag as well and my heart is always at home.”