Electoral Commissioner Patilias Gamato while handing over the Writs said out of the total 6, 369 wards in the country, 5, 875 wards have their Writs returned yesterday afternoon marking a percentage of 92 percent.

Out of the total, 15 of the wards were uncontested. 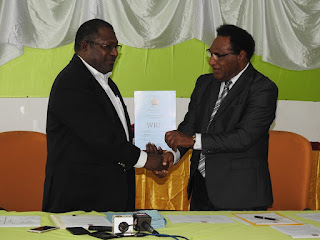 Mr Gamato said the remaining 8 percent are given up until next week to have their writs returned.

The Return of the Writs now enables the swearing-in and election of the Presidents and Mayors of respective LLGs throughout the country.

Minister Niningi reemphasized that the inaugural meetings and election of Presidents will start from the 05th to the 17th of August 2019, adding that no meeting should be conducted during weekends.

He also reaffirmed his earlier call to Ward Members vying for Presidents and Mayors posts not to use bribery, harassment and coercive tactics or any form of violence to gain support of fellow ward members.

Minister Niningi commended the Marape-Steven Government, the PNG Electoral Commission, the Provincial Affairs Department, Provincial and District Government CEOs and staffs and the people of the country for the support in ensuring a successful LLG Election.