8/08/2019 Headlines, PNG News
Lae Police SRU 102 has apprehended eight men for various offences around the city. A vehicle was stopped and searched at Eriku close to LFA, by SRU 102 where eight men were found to be conveying Marijuana . 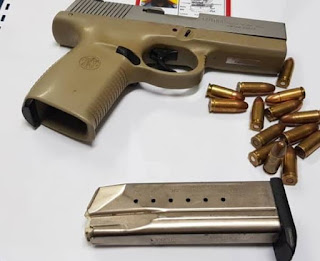 The driver of the vehicle was also found to be carrying a loaded factory made pistol with live ammunition. The pistol has been confiscated with the person in possession of it, a newly elected Council Ward Member , arrested and charged for being unlicensed.

Of the eight , two are newly elected Ward Council Members of Madang Urban.

They have been formerly arrested and charged by CID. They will appear at the Lae District Court on Friday 09th of August 2019 for the first mention.

All eight (08) occupants of the vehicle after being charged are now detained at the Lae Central Police Station lock up.

The vehicle they were in was driven to Lae from Madang. All occupants charged are Madang based.

We encourage the public to call our Police Emergency Toll Free number 70903300 if you see anything or anyone suspicious so Police can attend to.

Together we can make Lae safe.  Lae Police Media