Central Bougainville MP Sam Akoitai told Parliament during grievance debate on Friday that the Prime Minister should start small to achieving his dream of “taking back Papua New Guinea”. 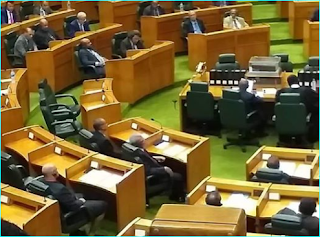 Mr Akoitai said the practice of double-dipping by ministers had been ongoing for years and MPs should not shy away from speaking out.

“Take back PNG, the best way is to start with small things — the little issues,” he said.

“We need to cut the expenditure which the government incurs every year.

“There are a lot of complaints by government departments coming in; Prime Minister, if you want to take back PNG, it’s about time we start with the ministers.

“When we come in into this Parliament, we are provided with the copy of the SRC (Salaries and Remuneration Committee) determination on what entitlements each MP has, on what our people provide in this country.”

Mr Akoitai said one Member of Parliament was entitled to a Port Moresby official vehicle, and an electoral vehicle in his or her electorate.

“Ministers are entitled to a Port Moresby official vehicle and a support vehicle,” he said.

Mr Akoitai said the SRC determination enables funds to be made available to service these vehicles.

“There are complaints from government departments that ministers are “double-dipping, meaning that we are getting our full salary package but then ministers are requesting support from the departments to service their vehicles,” Mr Akoitai said.

“We have to start with small things, before we can start on bigger things, and I am happy that you are taking a tough stand on departmental heads — but ministers must be held accountable.”

He said this had been experienced over time but the issue had never been raised in Parliament.