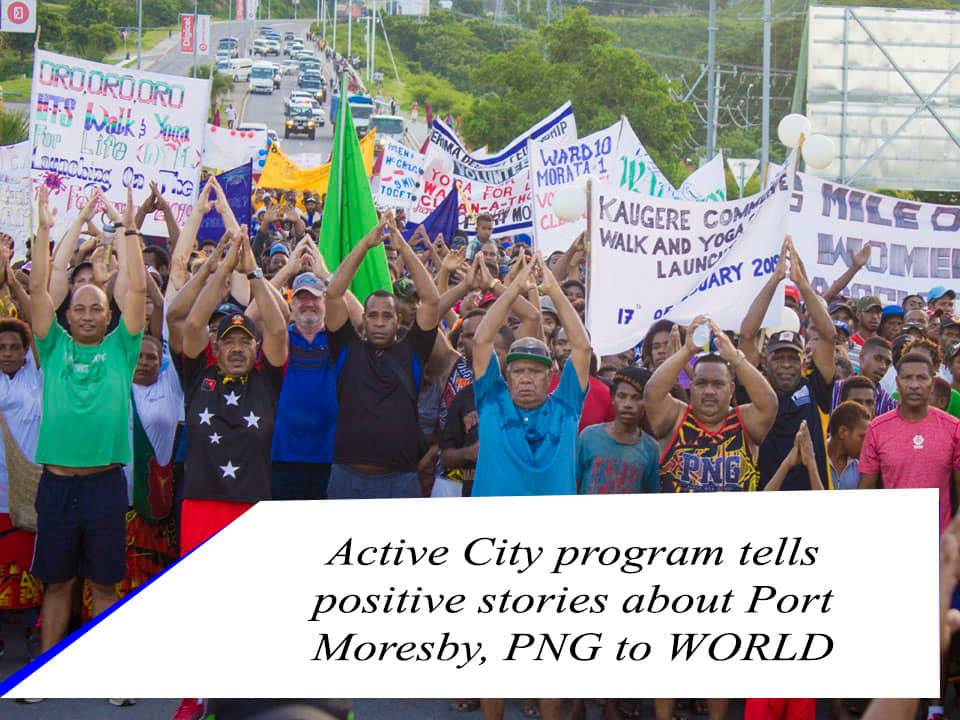 PORT MORESBY: The successes and benefits of the Active City Development program (ACDP) in the city are rewriting positive stories about the reputation of Port Moresby and the entire country.

This is the key message Governor Powes Parkop delivered this morning (Sunday, February 17, 2019) at the launch of the program for this year in Paga Hill Ring road.

They have not only made a recommitment to lift the city but also to their health, wellness and fitness.

It started off well with the Walk and Yoga for Life (WYFL) in which they walked the usual 8-Kilometre from the Barracks to Paga Hill Ring road where the annual program was launched with so much fanfare.

The program went for a recession of two months after recording 48 walks and 56 Yoga classes last year.

Governor Parkop said the program was making tangible differences in the communities across the city and the whole country.

He attributed the successes and benefits of the program that no huge international organisations have inspired the city dwellers to embrace healthy lifestyle and voluntary cleaning and community mobilisation other than the program.

Mr Parkop said the participants of the program not only set the environment ready for the APEC Leaders’ Summit, which was hosted in the city last November-but also left a mark in the memories of the leaders when they were greeted and welcomed to high standards, a memory which has found a place in their hearts.

“It is a start of another year. Start of another progress and a start of us bringing a great year for our program and more importantly for our capital city. Further, you all are our champions sustaining this program very successfully. You are staying the cause. Waking up early is making a commitment not just to our program, but more importantly to yourself. It is good for your own health, fitness and wellness. It is good for your own life. You are making a commitment to lifting your life, making your life better every day,” he told the massive crowd.

He noted that the script about the city and the country overseas was mainly negative, something which realities on the ground do not reconcile with this perception.

“However, one story that is rewriting a new chapter is the Active City Development program which is being told in Europe, Africa, the United States of America, India, Timor Lest and others. A former UN Resident coordinator was asked to share his experience of POM especially the Active city Development program’s Walk and Yoga for Life in Timor Lest. It is the positive story that is being told across the world. That is why it is an exceptional program. When we are walking, everyone else is following our footsteps, but we are walking for a greater cause. We are walking for the greater good. We are walking to lift ourselves. We are walking to lift our city. That is the power of our program.

“The success of the program is you are turning up for WYFL Sunday. Hagen is now replicating the program. You are inspiring another city. This is the power of our walk. This is the benefit of it," he said.

He commended city dwellers and the indigenous people who were walking in harmony reclaiming the street feeling safe coming together as one people in one city towards one destiny, calling on other MPs to replicate the program in their districts and provides as it has produced great results.

The people, who hail from thousand tribes, 860 languages and religious background, have overcome all the difficulties and challenges, and are walking as one people, one city, one future and one nation, he said.

Governor Parkop announced that this year he was planning the program to be a greater when it delivers flagship events to high standard as good as or better than the other cities in the world.

The events include World Environment Day, Independence Day, Christmas Carols by the Sea and New Year Celebration which are all in line with the city’s global brand campaign-#AmazingPortMoresby-One People, One, City, One Future,

“Our program has already delivered all these world class facilities. We are setting bench mark for the World. We are set for a great year. We have to reach out more to be part of the program that lifts them and changes their behaviours,” he said.

In the city people walk every Sunday for 48 weeks. They do Yoga every Saturday. They turn up at community classes. All the acrobats attend to three classes every week and go out to perform in all parts of our city every week. PNG’s own circus troupe, a first of its kind also commit themselves to its activities.
Port Moresby is only one of few cities in the world which does these.

Program Manageress, Fazilah Bazari said the program brought the city together to have a great carnival and parade today.

“Today we are gathered here to begin the next 48 weeks of walk and Yoga, great fun, great entertainment and community cohesion to take ownership over the city and to continue the activities of our program. This includes walking with youth, walking with marginalised women and people who are from all sectors of community. This year we have plans to walk with sporting clubs, with schools and all other organisations and use non-competitive and competitive sports bringing everyone together in the spirit of unity, respect, responsibility and sportsmanship.

“Our program pulls everyone together with their talents so he or she has a part to play and no one should be left behind making it a grand colourful activity,” said Ms Bazari.

She quoted Pope Francis who once said: “If we play the game of life like a game of sports, we will have many great win.” Unquote.