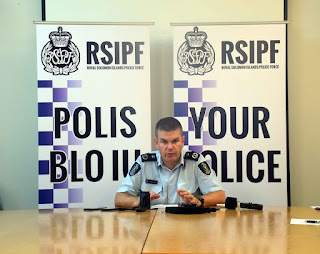 Commissioner of the Royal Solomon Islands Police Force (RSIPF) Matthew Varley says the recent accident involving a police vehicle in Central Honiara has damaged the trust and confidence of the community that the police worked hard to build.

The accident occurred along the Mbokonavera road in Central Honiara between 10.30pm and 11 pm on 19 February 2019. It is alleged the police vehicle was travelling at high speed along the Mbokonavera road heading south when it ran into the Holy Cross Cathedral brick wall near the road and over turned. The driver of the Police vehicle is a police officer.

The Professional Standards Internal Investigation Department (PSII) of the Royal Solomon Islands Police Force (RSIPF) together with the Traffic Department at Kukum are investigating the traffic accident.

Commissioner Varley says, “This is a very serious incident involving a police vehicle. It’s a grave breach of trust and responsibility by the police officer involved. I am taking this matter very seriously. To be frank, I am embarrassed by this incident. And I can assure you that this is something I and my senior officers are greatly disappointed about and are taking it very seriously.”

He adds: “The action of this individual officer is irresponsible. It does not represent the overwhelming good majority of police officers who do their job well and professionally in service of the RSIPF and this country. I can assure you that many of our police officers are greatly disappointed about what happened.”

“This matter is treated with high priority, and I have ordered his suspension yesterday which it should be served to the officer today. The officer’s access to firearms has been cancelled and he is restricted to access police premises, including the National Respond Department (NRD) at the Rove Police Headquarters in Honiara,” Commissioner Varley explains.

Nine witnesses have so far being interviewed including the two police officers who were in the vehicle at the time of the incident and statements provided to the PSII.

The police officers including the officer driving the vehicle at the time of the incident were not on duty and were not carrying any firearms.