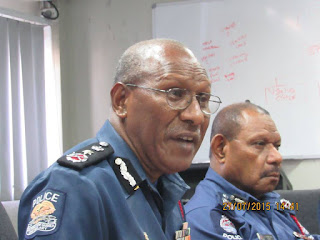 POLICE Commissioner Gari Baki is pleased with the efforts and performance of the Policing the Police Task Force Team.
Commissioner Baki said this during the first media conference he held at the police headquarters in Port Moresby this week.
Commissioner Baki said he initiated the team in August 2018 amid alarming increase in the number of police ill-discipline behaviour, police abuse and brutality, police corruption and non-performance. This he said was quite evident in the mainstream as well as the social media.
“As police commissioner I was very concerned about bad police behaviour. I was in fact embarrassed with the number of cases being reported in the media,” Mr Baki said.
“Why was this happening? Was it a training issue? Was this because of a lack of police resources? Was this because of the working conditions of our men and women? Was it a pay issue? Are we in this situation because there was no effective supervision, and command and control within the constabulary? Was this a leadership issue?
“And the answer to those questions is yes. We are in this situation due to a combination of all those factors,” Commissioner Baki said.
Mr Baki came up with the Policing the Police Initiative and established the PPTFT which reports directly to his office through the National Capital District Metropolitan Chief Superintendent Perou N’Dranou.
“I named this team as PPTFT because one of its main duties was to act swiftly on complaints laid by members of the public against bad police behaviour. The other primary objective was to respond to public complaints also in a timely manner,” Mr Baki said.
Commissioner Baki said since the team’s inception it has recorded a total of 133 arrests of which 42 are of members of the Police Force. Twenty of these policemen allegedly committed offences under the Summary Offences Act, 17 committed offences under the Criminal Code Act, five committed offences under the Firearms Act and one for breaching Interim Protection Orders under the Family Protection Act.
The 42 also included two members of the PPTFT, one was arrested, charged and convicted to one year in prison for failing to keep safe custody of a firearm and another for threatening behaviour. The matter is before the District Court.
“I made it very clear to the members of the PPTFT that they would be dealt with swiftly if they step out of line and we did that,” Commissioner Baki said.
Commissioner said the members of the Constabulary have been convicted and serving time in prison for a number of offences including two years for indecent assault, six and seven years for grievous bodily harm, and four years for aiding prisoner to escape. Others have been charged for various offences. The most recent arrest was two policemen at the Hohola Police Station for sexual penetration, in possession of pornography materials and production of pornographic videos.
“I issued directives that all members of the Constabulary charged criminally be dealt with administratively as well. Whilst dealing with policemen the team has also continued with its normal policing duties,” Commissioner Baki said.
Commissioner Baki said the most recent successful police work for the PPTFT was the recovery of 76 and a half cartons of the 160cartons of cigarettes worth K1.3 million stolen from Choulai Wholesale at Badili. He commended NCD Metropolitan Superintendent N’Dranou, Detective Senior Sergeant Terry and their police officers for the excellent police work in recovering the stolen items.
Commissioner Baki also commended Senior Sergeant Terry and his team for not accepting the K100,000.00 reward money. He said he made it clear to Senior Sergeant Terry that it was their duty and they have sworn an oath to protect and serve. Their commitment should not be dictated to or motivated by monetary rewards, he said.
Commissioner Baki however said that as a way of recognising the effort of the members of the PPTFT he would be looking at promotions.
“We have lost so much trust and confidence of the public, let us continue the good work and win back the people’s hearts,” Mr Baki urged members of the PPTFT.
Mr Baki urged all other members of the Constabulary not to see the PPTFT as a threat. They should not feel intimidated or threatened if they are doing their job without fear or favour. They should not be afraid of the PPTFT if they are disciplined and not abusive to members of the public.
“We have a common interest in removing the unproductive, corrupt and abusive members of the police force so work with the team and restore our lost pride. For me as the Commissioner it is not a question of quantity but quality of our police officers. So if I have to sack 500 officers I will do so. I would rather have a small police force of committed, dedicated, honest and trust worthy people than a big police force of corrupt, non-performing, and abusive policemen.
“I will soon be announcing my policing initiatives for 2019 and beyond. I intend to establish similar team in other provinces around the country. The lessons learnt from the establishment and operations of the PPTFT will form part of my policing initiatives for the future,” Commissioner Baki said.
SHARE THIS
Share it Tweet Share it Share it Pin it