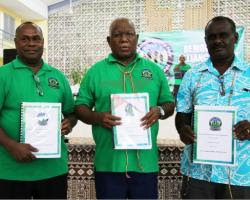 The Democratic Alliance Party (DAP) of Solomon Islands caretaker Prime Minister, will review the nation’s diplomatic ties with Taiwan if it comes to power after this year’s election.

That’s according to the party’s manifesto launched in Honiara Tuesday.

“We will embrace a ‘look north’ foreign policy while reviewing our diplomatic ties the Republic of China (ROC) on Taiwan,” the party’s manifesto reads.

Caretaker Prime Minister Rick Hou is leading DAP into this year’s election. He will be assisted by caretaker Development Planning minister Jeremiah Manele.

It’s believed DAP becomes the first political party to explicitly state its intention to review the nation’s ties with Taiwan.

Taiwan is one of our major donors, providing up to 100 million a year in budgetary support.

That’s apart from the many scholarships it offered annually to students to study in Taiwan.

But the nation’s diplomatic ties with Taiwan have always been fragile, with Mainland China consistently working behind the scenes to get the country switch the relationship.

DAP said it believes that ‘Looking North’ means taking better advantage of opportunities in Asia, something successive governments have worked at.

“This is not a new policy but DAP aims to strengthening diplomatic and economic relations with Asian countries for development purposes,” it says.

The other fundamental reform DAP aimed at is to pursue new opportunities with traditional partners like Australia, New Zealand and further out, Japan and Taiwan.

It added the party will also utilise existing and explore new opportunities from diplomatic relations established with other countries.

“The party will also review all the foreign postings and diplomatic missions.

“The possibility of actively pursue opportunities on South-South Cooperation and Partnership is one of the DAP international affairs policy.”

But DAP made it clear it will respect the sovereignty of Indonesia over West Papua.

Instead, it says it will continue to urge the United Nation Human Rights Council to take appropriate actions to address human rights concern in West Papua.