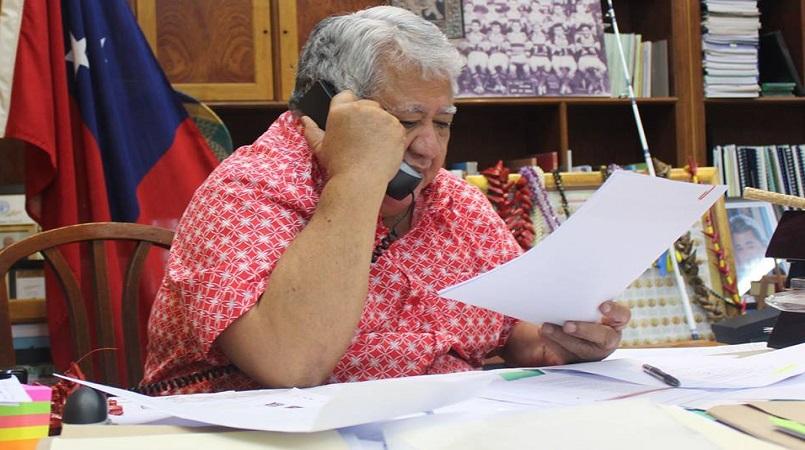 Samoa’s Prime Minister Tuilaepa Dr. Sailele Malielegaoi has refuted claims of nepotism related to the appointment of his son, Oscar Malielegaoi to the Ministry of Finance.

Critics have labelled the appointment of Oscar as Chief Executive of the Ministry as one example of corruption in government and nepotism.

However, PM Tuilaepa said this is furthest from the truth.

Addressing the misinformation, Prime Minister said the truth is, the appointee is the victim of misinformation with the critics not considering the fact that the new CEO of Finance has the qualifications which include a Master’s degree, vast experience in the public and government finance sector, a member of the Certified Accountants faculty and has international experience as a former staff with the Asian Development Bank.

“The truth of the matter is he was deemed qualified by the selection panel after satisfying the two essential ingredients for CEO appointments which are your academic qualifications and experience.
“There was no sinister plot surrounding the appointment as the position was publicly advertised for any person to apply.
“It’s unfortunate that he was the only applicant but the same can be said for other CEO and senior government posts which only attracted one applicant.”

He added that insinuations accusing him of allegedly intervening to influence the outcome of the selection process is an outrageous lie because under no circumstance was he involved.
“Even when it was tabled before Cabinet, I distant myself due to the glaring conflict of interest,” said the Prime Minister noting that this is not the first time that a high ranking government official is left in the same predicament as he is.

“The policy is to consider the merits and if he or she is qualified than why should a son or daughter who has earned it be penalise because his or her mother or father holds a high ranking post.”

On the political arena, the Prime Minister said that he had expected the social media’s ghost critics to use the appointment as a political football to spread lies and misinformation.

“I know their target is my administration and my leadership in their ongoing campaign to woo the voters,” said Tuilaepa.
“If anything, (Oscar) is convicted for being a qualified profession because he is my son.
“However the burden of proof is on his shoulders to prove his keep. Just because he is my son does not mean that he will be getting any preferential treatment because he will be accorded the same privileges like any other CEO.
“Should he fail to deliver or under any circumstance violate his contractual obligations to government, I will be the first to let him go.”

The Prime Minister has also responded to the same critics in Samoan during his Taimi ma le Palemia weekly television program with TV1.