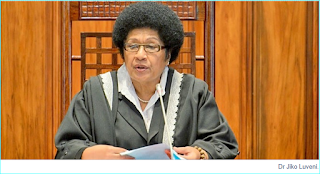 Dr Luveni, 72, is believed to have died this morning. The cause of death has not been released yet, however, it is understood that she died after a short- illness.

Dr Luveni was a trailblazer in advocating women’s interests and participation in national affairs.

She was the first woman to be the Speaker of Parliament.

Dr Luveni was a dentist by profession before she entered politics.