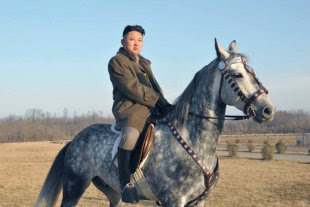 SEOUL: North Korea has acknowledged “drawbacks” in its agricultural sector this year, echoing UN reports of declining crop yields in a country that remains heavily reliant on food imports and aid.
Agricultural production is chronically poor in the North, which has periodically been hit by famine, with hundreds of thousands dying – some estimates say millions – in the mid-1990s.
Premier of the government cabinet, Pak Pong Ju, referred to “drawbacks made by some farms and units in the past” at a national meeting of farming officials that took place in Pyongyang this week, state media said yesterday.
“He said that they failed to conduct seed production and management in a responsible way and also fell short of doing proper strain distribution,” Pak was quoted as saying by the KCNA news agency in an English-language report.
He “underscored the need to attain the goal of grain production” set out in a five-year development plan that wraps up in 2020.
The North has been less hesitant in highlighting shortcomings and policy failures through its state media since leader Kim Jong Un succeeded his late father Kim Jong Il in 2011.
The young, Swiss-educated leader has occasionally been reported rebuking officials for failing to satisfactorily carry out tasks.
The UN’s Food and Agriculture Organisation said this month that the isolated, nuclear-armed state would need to import 641,000 tonnes of food in the coming year. The figure is up from 456,000 tonnes this year, when it bought 390,000 tonnes and received 66,000 tonnes in food aid.
There was a widespread lack of access to food in the North, it said.
North Korea was one of 40 countries – 31 of them in Africa – identified by the FAO as in need of external assistance for food.
UN agencies estimate that 10.3 million people in the North need humanitarian assistance.
But donor funding has dried up in the face of political tensions over its weapons programmes, with critics saying the provision of aid encourages Pyongyang to prioritise its military ambitions over adequately providing for its people.
David Beasley, the head of the UN’s World Food Programme, said in May that there was undoubtedly a hunger problem in North Korea but it was not on the scale of the 1990s famine. – CNA
SHARE THIS
Share it Tweet Share it Share it Pin it