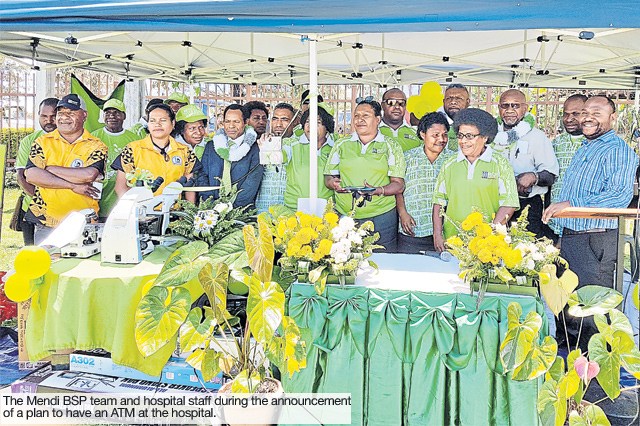 Bank South Pacific in Mendi plans to install an automated teller machine (ATM) at the Provincial Hospital in Southern Highlands following a request from hospital staff.
Provincial Health Authority cooperate services director Ben Walom said it would greatly help hospital staff who spent a lot of time joining the queue at the ATM in town.
The provincial health authority has 783 staff in the province, including the 383 at the hospital.
“The 383 are stationed at the hospital to serve patients,” Walom said.
“But on many occasions, they travel to town and join long queues for hours.
“The lives of the patients are important and they should not be left unattended to.”
Walom said the ATM could also be used by patients and visitors.
Mendi BSP branch manager Philip Solala said he would do his best to have the ATM installed at the hospital.
“I understand the hardship staff and patients go through to access the ATM at Mendi town,” he said.
“ It will soon be installed.
“The bank’s community projects are undertaken nationwide, focused on education, health, sports, environment and other community initiatives.” The National/ONEPNG
SHARE THIS
Share it Tweet Share it Share it Pin it