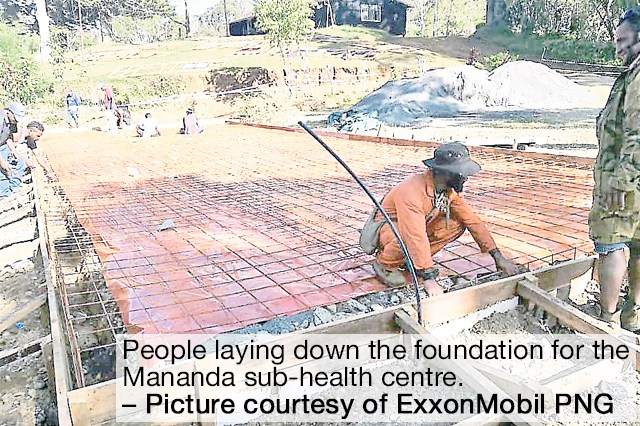 ExxonMobil PNG is investing K2.3 million to rebuild and equip three health centres in the PNG LNG project areas in Hela.
The operator of the PNG LNG project said in a statement that this was part of its on-going support to invest in infrastructure improvements and support earthquake-affected communities.
It said restoration of local health facilities had gained momentum in recent weeks with work on three sub-health centres underway.
“The Mananda and Para sub health centres are managed by the Evangelical Church of PNG (ECPNG) while the Juni sub-health centre is staffed and operated by National Department of Health through the Hela health authority,” ExxonMobil said.
“An assessment conducted by Hela provincial health authority and ECPNG identified the critical needs for health care facilities in the province following the earthquake.
“The existing Mananda and Para sub-health centres are currently being repaired and an additional staff house is being built for the Para sub-health centre.
“At Juni, a new sub-health centre encompassing five wards is being built on the site of the old clinic.
“Located within the Komo-Magarima district, it will service a population of 5000 people.
“The Juni sub-health centre is a level 2 health facility per the PNG national health services standard, but was unable to meet the health service delivery requirement with the old building and equipment.
“With the new building design, it will expand its services to provide ante-natal and post-natal care, inpatients’ wards, emergency and dispensary rooms, a drug storeroom, health promotions, utility and procedure rooms, volunteer counselling and testing of HIV/AIDS, with modern sanitation and shower facilities and hot water system.
“Local tradesmen were contracted to repair and rebuild the local health centres, ensuring the infrastructure improvements and earthquake restoration work also generated income for local families.”
ExxonMobil PNG executive director of production, Dinesh Sivasamboo, said there was still much work to be done for communities to recover.
He said the company was pleased to continue support to its neighbours most impacted by the earthquake in Hela.
“It is vital that basic health services are restored in the communities,” Sivasamboo said.
“Healthy populations mean people participate more actively in the social and economic growth of their communities.”
ExxonMobil PNG, in partnership with other organisations, is also continuing to provide support for the restoration of education services, community food gardens and assisting the Government to build roads and bridges for Hela and Southern Highlands, provinces that were destroyed during the disaster.
SHARE THIS
Share it Tweet Share it Share it Pin it