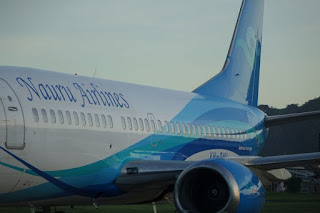 The Tongan prime minister has hosted a delegation from Nauru Airlines to discuss the possibility of a service between Tonga and Brisbane.Akilisi Pohiva met with the Nauru Airlines chairman Trevor Jensen and the managing director of Real Tonga, Tevita Palu, about a potential partnership.

Mr Pohiva said representatives of the Tongan community in Brisbane had informed him that none of the regional carriers were interested in providing a direct service but that Nauru Airlines had indicated they could partner with Real Tonga and the government.

Mr Jensen said after a number of meetings in Tonga, the airline liked what it had seen and was keen to pursue the matter further.

Mr Palu said there were still a lot of areas to be discussed and numbers to be crunched but he was in total support of the joint venture.

Nauru Airlines is wholly owned by the Government of Nauru and currently flies to Brisbane, Nadi, Tarawa, Majuro, Pohnpei and Guam.