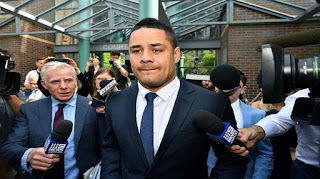 The lawyer for rugby league star Jarryd Hayne has told a Sydney court his client is innocent and will be pleading not guilty to a sexual assault charge.

The 30-year-old is accused of the aggravated sexual assault of a woman at a home in the NSW Hunter region on September 30 — the night of the NRL grand final.

Mr Hayne's lawyer spoke to media outside the court.

"Mr Hayne maintains he is innocent, a plea of not guilty will be entered," he said.

"He'd like at this time to thanks those who have offered him support, in particular his mother and father."

Mr Hayne sat in the front row of the public gallery at Burwood Local Court while his matter was heard.

He is accused of biting the woman, who he met on social media, during the alleged sexual assault.

The woman claims she first reported the alleged incident to the NRL, which subsequently referred the matter to police.

There were chaotic scenes as Mr Hayne left court.

He climbed into the back seat of an SUV, which drove off without his manager Wayne Beavis, who had to run after the vehicle.

Mr Hayne began his career with the Parramatta Eels in 2006, but left the club to play professionally in America's NFL.

After one season with the San Francisco 49ers, Mr Hayne returned to the NRL after a failed attempt to join Fiji's Rugby Sevens team at the Rio Olympics.

His contract with the Paramatta Eels ended on October 31 and he has not been signed by any club.

Mr Hayne's bail will continue and he is due to appear in court next February.

According to court documents, his bail conditions include reporting to police three times a week and surrendering his passport.

Mr Hayne is prohibited from entering international airports or the Newcastle local government area, and must not contact the woman or any witnesses.