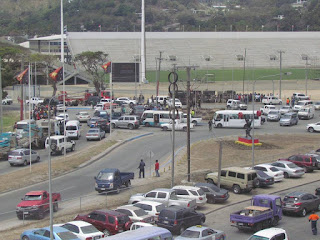 IN 2019, the National Capital District Commission will start charging drivers who drink and drive and destroy light poles, flower beds and other public landscapes and amenities.

National Capital District Governor Powes Parkop said this after another accident on the new Independence Boulevard in Waigani was reported.

“We have started seizing vehicles and tracking them down with help of CCTV. We are going to extend the CCTV capacity so we can catch more,” he said.

“In the new year Magisterial Service will allocate to us a full time magistrate to deal with all offences and regulations we are responsible for as a municipal government so we hope to be more effect, this includes litter, graffiti, betelnut selling and chewing in public places without authority, keeping houses in unhygienic condition, breach or physical planning and building board laws etc.

“We plan to also build a bigger holding cell to deal with all these offenders. In 2019 onwards we plan to strengthen our enforcement capacity more to deal with such people who destroy street lights and planter boxes or landscaping and trees/flowers to these other breaches of regulations and laws.”

Mr Parkop said that for damages to light poles and plants and planter boxes/landscape it would be cost of the damages and repair.

For the others the fines are already defined by the regulations like betelnut laws passed by NCDC and Parliament recently, Mr Parkop said.

“This means, the importation, distribution and sale of spray paint in cans or containers of any form or anyone who defaces or writes anything using any modes in public place is prohibited.

“This imposes a penalty of K10,000 or three years imprisonment,” he said.

“Failure to comply will see an imposition of penalties from a fine of K10,000 to a three years imprisonment for betelnut selling.”

Mr Parkop said that for tobacco in any form there will be no selling buying or smoking of brus, cigarettes in public places and would also see a penalty of K10,000 and three years imprisonment.

“Tobaccos products in any form will not be allowed to be sold in any city markets including public places in NCD,” he said.”It has been hard to enforce because we don’t have cooperation from police prosecution and also Magisterial Services due to overload or work by magistrate. “We are solving this now.”
SHARE THIS
Share it Tweet Share it Share it Pin it