9/14/2018 Headlines, Sports
From doubtful finals qualfiers to grand final hopefuls, Easts has ridden a wave of momentum to be one win from a maiden Intrust Super Cup premiership.

The Tigers' 36-26 preliminary final victory away from home against the Burleigh Bears completes a remarkable three weeks of sudden-death footy where they have scored 118 points and conceded just 46. 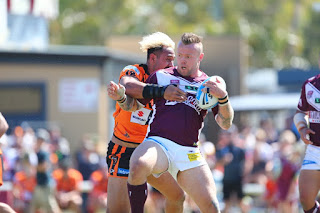 Their breathtaking attacking form was too much for the Bears to handle, bowing out after finishing the season in second.

By comparison, Easts qualified fifth, only securing their finals spot in the last week of the regular season – yet they are now slated to face Redcliffe on Sunday, September 23 in the game that decides it all.

For this match the Tigers had a heavily bolstered squad, with both Sam Kasiano and Billy Walters returning to the line-up, skipper Jake Foster overcoming concussion concerns, and strike weapon Scott Drinkwater free of Melbourne Storm duties.

The changes meant that the hero of the previous two weeks – slender playmaker Josh Ralph – was omitted, along with bench forward Jarred Tuite.

Burleigh skipper Luke Page also found himself out of the action early, pointed to the sin bin for a rest in just the ninth minute, following an intentional offside tackle on Tigers prop Albert Vete.

While he was cooling his heels, Patrick Kaufusi danced and surged through five would-be defenders to put the visitors up 6-0 after 13 minutes.

The Tigers went up 8-0 when Torpy added a further penalty, then Burleigh compounded the deficit by kicking out on the full.

With only 39 per cent of possession it was all going against the Bears until a controversial and heavy goal-line tackle by Dylan Phythian on Billy Walters.

That seemed to spark the Gold Coasters, with Phythian then pouncing on a Jamal Fogarty grubber millimetres before the deadball line.

Fogarty converted from an almost identical spot to where he missed an earlier penalty attempt in just the 5th minute and a score of 8-6 made for a more involved crowd.

The momentum had swung wickedly and the Bears backed it up when Page returned to roll through three Tigers defenders, again grounding the ball in a manner that took several views on the video replay.

At halftime the advantage was 12-8 to Burleigh.

From the second half kick-off, Easts winger Conor Carey dropped the ball cold and it looked an ominous sign of things to come.

In the wash-up though, Carey put the icing on the cake, scoring Easts' final try after a frantic second half where they crossed the line five times.

In the final four minutes of the game alone, there were three tries, with retiring Burleigh forward and NRL veteran Matt White given the honours of booting the final conversion.

White would have known his retirement was coming 10 minutes before fulltime however, as Easts opened up a 30-16 advantage.

Kasiano and Drinkwater were both influential in Easts gaining the ascendancy, with Kasiano creating space and quick play-the-balls, and Drinkwater beating the first man in attack with nearly every touch.

Prop Vete was the Hastings Deering Man of the Match however, spurring his team forward with determined and constant running.

For the second week in a row, Tigers forward Kaufusi left the field for a head injury assessment after an awkward tackle, but returned full of vigour.

There were concerns for Drinkwater after an awkward tackle by Phythian seemed to aggravate a back injury, but the prodigious talent saw the game out.

Next Sunday's 3pm grand final will be Easts' fifth since the modern State League began in 1996, with the Tigers unsuccessful in their 4 previous attempts.