Sago as alternative to Wheat flour in PNG 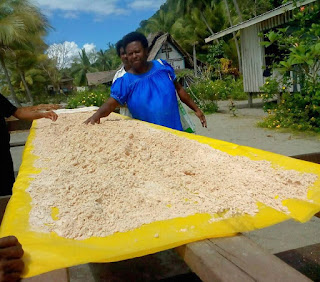 The Labu-Tale community, one of the three Labu communities located opposite the Lae port, host a vast field of sago bordering with the mountains of Buang in Bulolo district, and will be the first indigenous community in Papua New Guinea to use sago to produce into an alternate form of flour.

Unlike the traditional wheat flour, the Labu-Tale processed sago, in fine dust-like form, can be processed and preserved for up to 10 years.

Master trainer, Jacob Mailai, an Applied Science graduate from the University of Technology in Auckland, New Zealand, assured the trained locals they are now empowered and can be economically be independent by being involved in small scale downstream processing and producing locally, using their own local resources and staple food like sago through their skills obtained.

The trained participants, are now preparing towards a launching date to be set next month and also showcase their variety of sago flour products, the different sago flour dishes and also how they harvest and process their sagos at the annual Morobe Agricultural Show in October.

Together, the trainers and the Labu-Tale community are calling on the Morobe provincial government and the national government to create dialogue to further empower the people through some incentives and assistance.

(Pictured is Pupuna Siling, one of the trained Labu Tale mothers, showing sun-dried sago in one of the stages of sago preparation. Picture by Louise Lahoc)