Port Moresby Police keeping an eye on the harbour 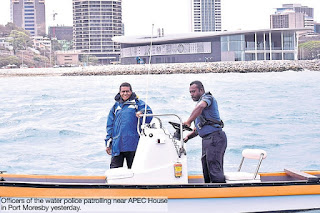 OFFICERS of the Water Police unit are advising sea travellers who use the Port Moresby waterfront on what to avoid during the Asia-Pacific Cooperation Leaders’ Meeting.
Sergeant John Vaki said the people were told to avoid travelling close to Apec Haus at Ela Beach.
“We are constantly patrolling the waterfront from Ela Beach to Fishermen Island, Gemo Island, and Tatana Island, Manubada Island, Liquefied Natural Gas port facilities at Papa village, Motukea wharf and Napa Napa oil refinery,” he said.
“Apart from carrying out Apec awareness, we are also on the lookout for sea piracy and for fishermen illegally using dynamites on reefs to catch fish.
“We are carrying out maritime safety awareness for them and enforcing the Small Craft Act. We advise them to wear life jackets when travelling between Port Moresby and their villages.”
SHARE THIS
Share it Tweet Share it Share it Pin it