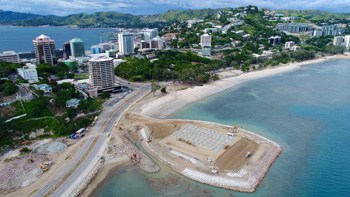 Secretary for the Department of Commerce and Industry, Andrew Liliura said this during his welcome speech at the SOM Symposium on how RTAs and FTAs can contribute to economic growth during the Third Senior Officials meeting held in Port Moresby on Saturday.
He said the reason for negotiating free trade agreements was because PNG wanted freer trade.
He said that economists disagree about a lot of things but the superiority of free trade over protectionism is no longer controversial.
And that the principle of comparative advantage and gains from trade are the coronets of the economics profession.
Thus, trade contributes positively to economic growth and poverty alleviation.
“I believe it is safe to assume that all of us here are aware; that like free trade itself, trade agreements create winners and losers between and within economies.
“And by gathering here member economies recognise that in some economies, some trade deals have contributed to inequalities in certain sectors,” Mr Liliura said.
So the question is, why don’t FTAs work as envisaged or what do FTAs really do?
And under what conditions will FTAs truly contribute to economic growth?
Mr Liliura said the main idea behind this symposium was to enhance our understanding of how economies can maximise the contributions.
He added that as much as possible they will try to minimise the negative impact trade deals and agreements that can have in different sectors of our economies.
He said that most of the economies represented at the meet were contracting parties to one or more trade agreements .
He added that the collective experience was huge.
“Other economies could learn from such experiences to help negotiate comprehensive and high quality trade agreements which are mutually advantageous.
“We are also aware that the contemporary trade agreements these days go much beyond traditional trade restrictions at the border.
“As its covers regulatory standards, health and safety rules, intellectual property, labour, banking and finance, the environment and many other subjects,” Mr Liliura said.
He said the emergence of the fourth industrial revolution and rapid advancements in technology now adds one more dimension.
But they are not unexpected, as The Lima Declaration sets the basic goals and principles upon which the next generation of trade agreements will be negotiated.
He said the establishment of the APEC Vision Group is also a key step setting the course for 2020 and beyond.
SHARE THIS
Share it Tweet Share it Share it Pin it