8/26/2018 Headlines, PNG News
Papua New Guinea Mining Minister Johnson Tuke says he is not aware of issues arising from the Hidden Valley mine and will only respond upon receiving official complaints. 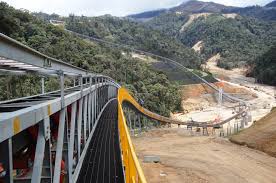 The Minister made this response to Rex Mauri, Chairman of Nakuwi Landowners Association, the traditional landowners of Hidden Valley mine operated by South African company, Harmony Gold Mining Company.

Mauri threatened to shut down the mine as a last resort approach, saying it is unfair that the government failed to review the Hidden Valley mine Memorandum of Agreement, five years after it was due, while now rushing into negotiating a new agreement for the new neighboring Wafi-Golpu project.

Mauri said, he will lead the locals in forcefully shutting down the Hidden Valley mine, after failing to get the national government to review the outdated HiddenValley Mine MoA.

As a result, this has given room to the developer in abuse some operational matters, especially overlooking its obligation in prioritizing the landowners in employment, contracts and other spin-off activities.

“This government is not playing the right thing, no,” Mauri, who initially got into the mining industry 36 years ago as a young local, guiding gold explorations teams into the jungles of what is now the Hidden Valley mine, said.

The minister, who is also Kainantu MP, said there are procedures in place for landowners grievances.

He added that he has not yet received any formal complaints from Mauri, who is also president of all mine landowners associations around the country, and will only respond to accordingly.

“I only talk about what is before my table and nothing of such nature has reached my table,” he said.

“But again, we are guided, the mining industry is a guided industry, we’ve got sets of laws and acts," Minister Tuke said.

“I will only respond as and when a letter of complaint come forth to my office but at this point in time I am fairly ignorant,” he said.