PNG Govt aims to get all citizens registered by 2021

8/27/2018 Headlines, PNG News
The Papua New Guinea  Government aims to have all citizens registered with the National Identification and Civil Registry Office by 2021, says acting Registrar-General Michael Kumung.
“So far about 500,000 people have been registered since October 2017. This in an increase from the 60,000 registered (at the end of) 2014 for NID cards and about 100,000 for people below 18 issued birth certificates.” 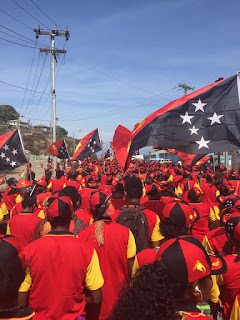 Kumung yesterday signed a memorandum of understanding with the Pomio District Development Authority to carry out registration in the district.
The Government-funded national identification project started in 2014 to provide reliable information and data needed for proper planning.
“The target is to have all registered by 2021. The challenges are enormous,” he said.
“So partnerships with Government agencies, provincial governments, district development authorities, local level governments and non-government organisations such as churches are important.”
On public servants, Kumung said the Personnel Management Department and the Education Department wanted all registered by the end of the year. “National Planning Minister Richard Maru has said that if public servants are not registered, they will not be paid. Although it will be difficult to register all public servant by the end of this year, at least we are keeping the momentum going.”
Meanwhile, Kumung said the two NID card printing machines had been fixed and now operating after facing problems in the past three months. The National/ONEPNG
SHARE THIS
Share it Tweet Share it Share it Pin it