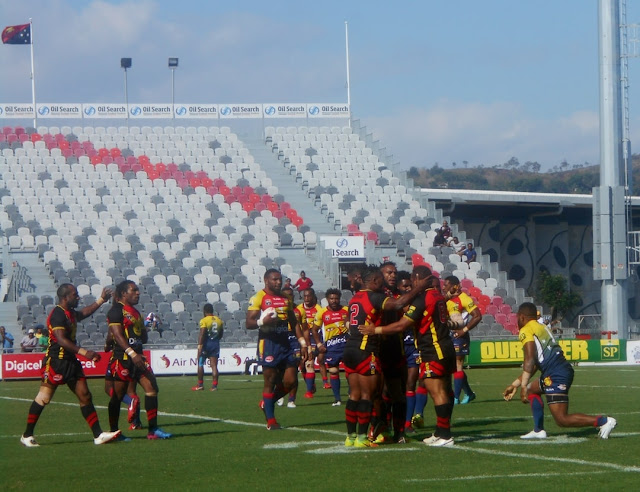 Hela Wigman and Goroka Lahanis showed class when they defeated home teams Vipers and Gulf Issous this afternoon at the National Football Stadium in their Digicel Cup round 16 double-header matches in Port Moresby.


The Lahanis held off home team Gulf Issou 10-9 in halftime however the Issou’s bounced back after half time with two points at the back of an  high tackle and a try to lead 15-10.

With more ball handling errors from both teams it was the visitors who pounced back with a try and a successful conversion to seal their one point ball game win over Issous 16-15.


Meanwhile, Hela Wigman led with 14 points as the Vipers trailed with 8 points in the first half. But the home side were quick to respond with a try just two minutes into the second half to level the scores 14 all.

From the back of a penalty against Vipers, the visitors got a penalty kick to lead 16-14. But this was not long before the Vipers struck with a try and a successful conversion leading 20-16.

With the Vipers defense lacking, Wigman bagged two more tries to defeat the home side 28-20.