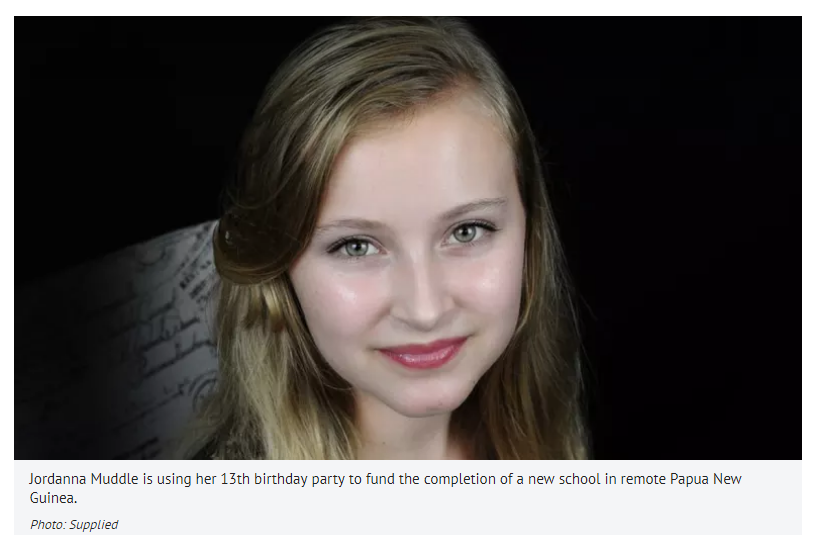 A Brisbane girl will celebrate her 13th birthday on Sunday, but this is no ordinary birthday party.

Instead of asking for presents, guests buy a ticket to get in and the proceeds are sent to remote Papua New Guinea to help build a new school.

Jordanna Muddle said she already has everything she needs and did not want people to "waste their money", so she asked guests to donate to children who could benefit from their generosity.

Before settling in Brisbane 18 months ago, the Muddle family had lived in Bangladesh, India, the United Arab Emirates and PNG due to Jordanna's father's job.

The inspiration for the unique birthday party came while the family was living in PNG.

Anna, Jordanna's mother, said while walking the Kokoda Track, the family saw how little the children in remote PNG communities had.

They also saw how difficult it was for them to get to school, which could mean a one-and-a-half to two-hour walk in some areas.

The family's guide was a man from regional Victoria who carried equipment with him and delivered it to remote communities along the Kokoda Track.

The guide also showed the family a particular school that was half-built. This is the school Jordanna hopes to make a significant contribution towards.

"There’s a community of children in PNG (where I lived for a while) that requires a school to be built," Jordanna wrote on the website set up for her party.

"I am hoping to raise enough money for the solar panels on the school. This will mean hot running water for the school facility.

"Our family friend is in charge of the project and I’ve decided to help as much as I can.

"If we all throw in just $20 per child and you ask your parents/carers/aunts/uncles to come as well, we can all enjoy a beautiful cruise along the Brisbane River (and) know we are helping build a school for kids who really need it."

Jordanna has invited friends from her classmates from Indooroopilly State High School and her netball team and hopes to raise about $2000, which should pay for the school's solar panels.

She hopes to inspire other people to consider asking for donations to their favourite charity instead of receiving presents.

Her six-year-old brother, Alexey, will turn seven later this year and is also considering asking guests to give money to donate to a charity of his choice.

Donations to Jordanna's 'Party With Purpose' can also be made through the GoFundMe camphttps://au.gofundme.com/party-with-purpose-sefoa-schoolaign.