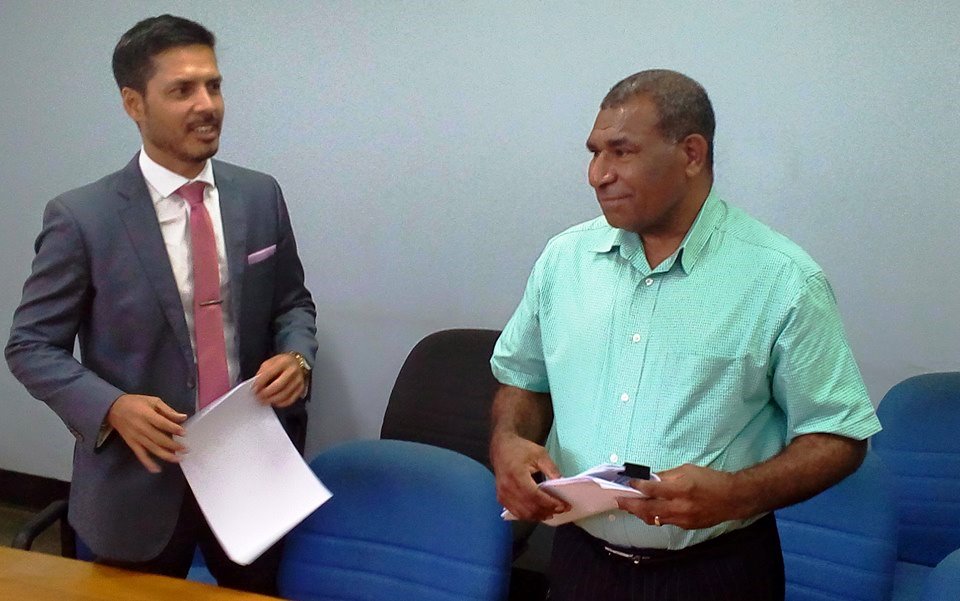 Mr Kramer, using his jurisdiction as a legislator, laid the complaint yesterday following several outbursts in the national mainstream media, social media and on the floor of parliament in recent weeks over City Hall’s and Mr Parkop’s involvement in the registration and subsequent engagement of that yoga company using public funds .
“When public funds are involved, it is the people’s right to know how those funds are used,” Mr Kramer told reporters when laying the complaint.

“And I have maintained right from the start of this issue that all details about the engagement of this yoga company and NCD and Mr Parkop’s involvement must be made public so that if there is any potential misuse of public funds, those involved must be held accountable. My position is still the same.”
“What is going to be hard to dispute is the fact that the yoga company, owned by foreigners who have been alleged to have close relationships with the NCD Governor, did not follow proper processes and laws when applying for registration at the Investment Promotion Authority.

“That and the fact that the Governor has denied the NCD’s involvement in financially supporting that company before it was duly registered, when documentary evidence we have seems to suggest otherwise, are all hallmarks of misuse and unaccountability.”

“The public and legislated leaders must be alarmed when public funds to the tune of K250,000 monthly or K3 million annually are being used by that same company and its owners to run health and yoga programs that have no immediate material benefits to the city’s population when most other social and economic services are not functioning as they should.”

Mr Kramer said after he raised questions about this issue, the NCD Governor had challenged him (Kramer) to lay a formal complaint with the police fraud squad for a proper investigation, and he has done exactly that.

National fraud squad director Mathew Damaru, when receiving the complaint and other documents from Mr Kramer, said they will follow normal police procedures and the results of their investigations will be made known thereafter.

Mr Kramer also told reporters that he will continue to raise the bar in the fight against corruption on the floor of parliament and elsewhere.

“The people of Madang have mandated me to serve them and that service includes fighting the corruption at the national level that is denying them and others around the country their right to funding and services from the National Government,” Mr Kramer said.

“We have done a lot of talking. Now is the time to take things to the next level in the fight against corruption.”

EMTV contacted the Governor Powes Parkop to get this response: They reported that he welcomed the decision of Member of Madang to register the allegations against his office with the National Fraud & Anti-Corruption.

The Governor maintains that due procedures were followed to award the contract and the funds were fully acquitted for.

Parkop said Mr Kramer's complaint on the Foreign Certificate issued is a matter for the Investment Promotion Authority and not a criminal matter.

Parkop said the Yoga Program achieved a lot and has plans to expand the program. He is confident the investigations will prove his innocence and the complain is just a publicity stunt the Madang.

Member of Madang responded the fact remains the Governor Parkop stated on the floor of Parliament he had declared his interest. This confirms he had in interest in the company's sole shareholder and director Ms Fazilah Bazari.

"While the Governor claims the Foreign Certificate issue is a matter for the Investment Promotion Authority however IPA funds didn't end up in the company's account it was funds from his office," Member of Madang said.

Bank records lodged with the IPA confirms his office funded the company with K144,000 of NCD rate payers money. An issue the Governor is very quiet about.

Member of Madang stated at the press conference he intends to go after all million Kina contracts involving public funds.

For too long corrupt politicians and public servants have conspired to inflate contracts awarded to their cronies and associates without out proper scrutiny and compliance with the Public Finance Management Act," Madang MP concluded.