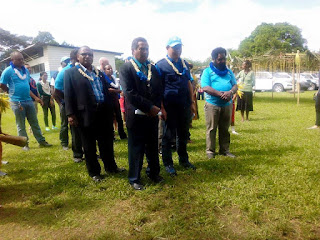 Papua New Guinea (PNG) commemorated World Malaria Day (WMD) today at Kuriva village in the Central Province.
WMD saw representatives from the Governments of PNG, Australia and China gathered at the Kuriva Elementary School to mark their cooperation of ending Malaria for good in PNG.
Dr Paison Dakulala, Deputy Secretary for the National Department of Health (NdoH) said that Malaria was a challenge that we faced throughout the country.
“We’ve celebrated World Malaria Day for the past years and we will continue to do so but I hope for not too many more years,” said Dr Dakulala.
“Apart from Africa, Papua New Guinea has the highest Malaria burden in the world. We are all here because we need each other to ensure that we all fight the Malaria where it matters most.”
He stated that the illness was easily preventable and can be avoided as prevention was better than cure.
Andrew Dollimore, a representative from the Australian High Commission, expressed on behalf of the Australian Government, their continuous support to fight Malaria PNG.
“World Malaria Day represents opportunity to help compromise Malaria in Papua New Guinea, and internationally,” he said.
“It is a day to remember and plan for future action, create awareness on Malaria related health issues, and reflect on measures of preventing, controlling and eliminating the illness in PNG.”
Associate Professor Li Jin, a representative of the Chinese Embassy, stated that the Chinese Government provided anti-malaria drugs that were worth K5 million to PNG, and in 2018, it will continue to provide more support for Malaria control in the country.
She stated that the three Governments are jointly implementing the Australia-China-Papua New Guinea Trilateral Malaria Project to put an end to Malaria in PNG before 2020.
SHARE THIS
Share it Tweet Share it Share it Pin it