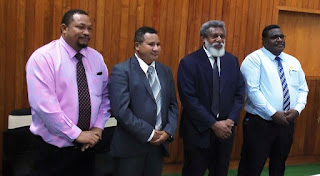 The reinstated Clerk of National Parliament, Mr. Vela Konivaro has officially taken up office following a handover- takeover ceremony in parliament today presided over by the Speaker of Parliament, Job Pomat.

Mr. Konivaro was appointed Clerk back in 2013, but was suspended following some issues and has been in court up until last week Friday when the National Court ordered his reinstatement.

Konivaro said he is ready to resume his role as Clerk of Parliament.

“I am honoured to be reinstated by order of the National Court granted by Chief Justice Salamo Injia.”

“I now officially commence as the Clerk of Parliament and I am happy to provide leadership in support of the Speaker’s vision and objectives as the head of the legislative arm of the government,” he said.

Meanwhile, the same event also saw the officially swearing in of Sam Akoitai as new member for Central Bougainville following the declaration by the National Court after a recount of votes for the open electorate seat was awarded by court.