Importance of Mountains discussed for the first time in PNG 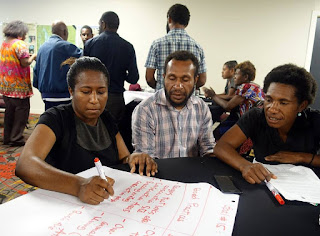 However, the impact of human activities in these areas are affecting the biodiversity and people’s values and culture.

These were some of the important points discussed during the first Mountain Dialogue, facilitated by Binatang Research Centre with the support of UNDPs Small Grant Programme, which was attended by representatives from the mountain regions in PNG and government agencies including the Department of National Planning and Monitoring, Department of Public Enterprise, Secretariat of Science, Research and Technology, the Climate Change Development Authority, National Forest Authority, the Eastern Highlands Governor’s Office, civil society groups and development partners, to raise awareness on issues affecting the communities.

According to the concerns raised, cities are the most impacted by humans.

The discussions identified key challenges with lasting solutions around conservation initiatives and how they benefit communities.

Also discussed was the introduction of genetically modified organisms affecting traditional gardening methods and the lack of consistent town planning resulting in settlements,waste management and lack of access to clean water.

This is part of a new wave of climate change discussions focused on communities in mountainous areas around the world.

The outcomes derived from the discussion will promote PNG’s contribution in addressing the global Sustainable Development Goals (SDGs) and will be presented in June 2018 in New York
during a forum at the United Nations General Assembly.

The discussion was facilitated by the New Guinea Binatang Research Centre with support from UNDP’s Small Grants Programme (SGP).

Tamalis Akus, UNDP’s SGP National Coordinator said: “the New Guinea Binatang Research Centre has done a wonderful job in bringing these communities and policy makers together to
discuss these issues. We have heard examples of how these participants have either contributed to or are facing the challenges of achieving the five specific SDGs on clean water, clean and affordable energy sources, sustainable cities and communities, responsible consumption and production and life on land.”

The mountain dialogue is made possible with funding from Global Environment Fund.