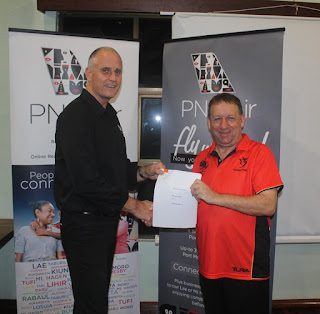 PNG Air has partnered with Athletics PNG through a three year sponsorship package valued at over K100,000 in flights.

This will see sponsored PNG Air flights for Athletics PNG Development Officers to travel to other centres to conduct programmes and enable key technical officials to attend major events such as National and Regional Championships.

In announcing the Sponsorship PNG Air’s Chief Commercial Officer Paul Abbot said that the Airline is proud to be associated with Athletics PNG as this organisation has done much to promote the country on the world stage.

We are hopeful that in some small way we can assist the development of this country’s athletes to achieve their full potential and compete to the best of their ability”.

APNG President Tony Green said that the support of PNG Air at this time was a huge boost to the sport as it embarks on an ambitious programme of in country athlete and coach development.

“The sponsorship complements the support of our international body (the IAAF) , Olympic Solidarity and the National Sports Institute by allowing our Development officer Dior Lowry to travel to a number of main centres to monitor national squad athletes, conduct coaching clinics and courses, and to assist conduct talent ID programmes” said Green.

"Being able to fly in a small number of key officials to help with the running of Regional and National Championships will be big help, especially in the area of photo finish, entries and results," he said.