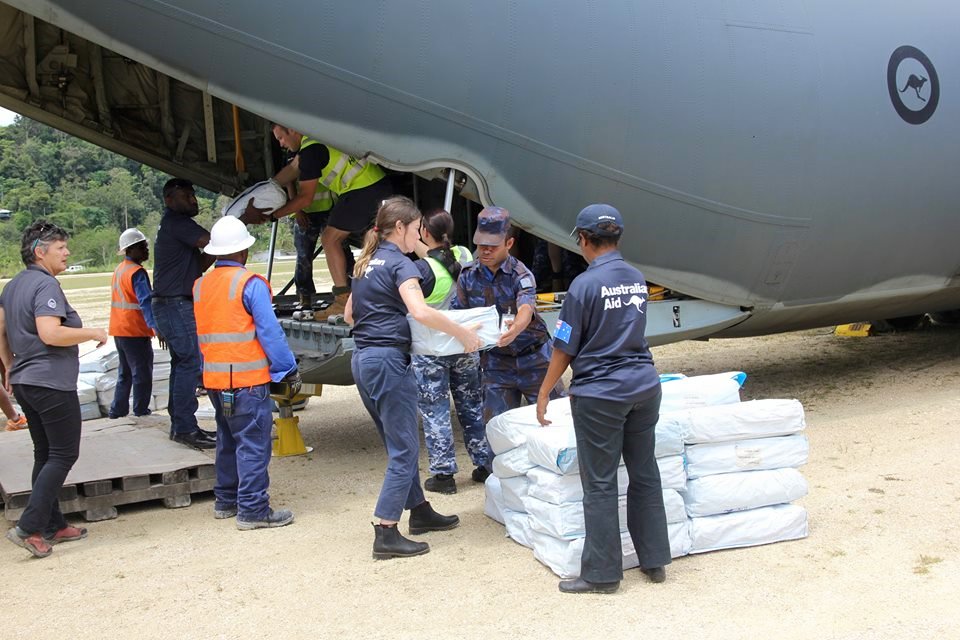 The Royal Australian Air Force has deployed a C-130J Hercules to Papua New Guinea to provide assistance, following the earthquake that occurred in the early morning of 26 February 2018.

The C-130J Hercules left from RAAF Base Richmond on 1 March 2018 and arrived in Port Moresby, where it has begun distributing humanitarian aid bound for earthquake affected areas.

The medium-sized tactical air-lifter has also been requested to conduct aerial surveillance of affected areas in support of the Papua New Guinea Government.

Humanitarian Duty Officer at the Australian High Commission in Papua New Guinea, Mr Darian Clark, said the earthquake affected many of the peoples living within the Papua New Guinea highlands.

“This was the biggest earthquake in a hundred years and it spread 150 kilometres across the fault line,” Mr Clark said.

“A number of urban settlements, as well as villages, have been affected. Many in the form of landslides and landslips, which means that roads have been cut off, water contaminated, power knocked out and other widespread effects for the local people.

“This is the first round of humanitarian relief supplies to be provided to the affected area and we understand there is a desperate need for the items we’re taking up. So I think the priority of what we are doing cannot be understated.

“We have a mixture of medical supplies and equipment; tarps, tents, blankets and water containers, the essentials of life, following a formal request we received from the Papua New Guinea Government on Wednesday.

“It really confirms the solidarity that Australia has with Papua New Guinea, in times of crisis. It has all been made possible, of course, by the C-130J here in country. It means that we have been able to respond even quicker than we hoped for.”

Further assessments of the impact, including in remote areas, will be required before the level of damage caused by the earthquake and ongoing aftershocks can be ascertained.

“The C-130J Hercules is a medium tactical air-lifter and Number 37 Squadron specialises in highland of Papua New Guinea operations. We conduct a lot of training throughout the year to ensure we are ready for this exact kind of emergency,” Squadron Leader Della Bosca said.