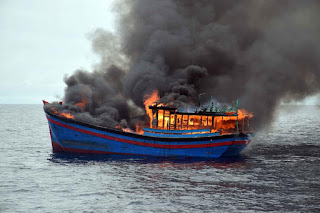 Supervising Commissioner of RSIPF, Deputy Commissioner Juanita Matanga says, “The RSIPF was given the responsibility to carry out the destruction of the last blue boat by the Ministry of Fisheries, while two other boats were destroyed by locals with the advice of Fisheries earlier on.”

“This blue boat is the last from the three boats detained since 26 March 2017, after being found fishing illegally at the Indispensable Reef 50 kilometers south of Rennell Island, Renbel Province and the High Court of Solomon Islands ordered their destruction,” adds Supervising Commissioner Matanga.

“I can confirm to the people and government of Solomon Islands, the last blue boat has been destroyed by the RSIPF in an operation conducted by RSIPF Maritime Department today, Friday 26 of January 2018 at 3:44 Pm, outside at sea in an area called Iron Bottom Sound,” says Supervising Commissioner.

Since the detention of the blue boats there have been concerns raised in the media that, the boats were a threat to our bio-environment, alleging species seen in the boats are not found in Solomon Islands and may bring new diseases.